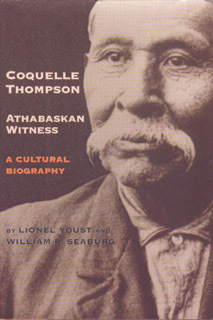 "Coquelle Thompson, Athabaskan Witness is an excellent book for anyone interested in Native American lives and in relations between anthropologists and Native Americans."
Dell Hymes: author of In Vain I Tried to Tell You.

"It is a cultural biography that personalizes the experiences of one persevering individual over nearly a century of change . . . it is a valuable document, rare among southern Northwest Coast studies." Robert Boyd: Ethnohistory.

"The information is rich; the narrative is lively and true. . . . This is a great book about a pivotal man, the life course of a reservation, the character of a region, and about the complexities of society, biography, and literary representation."
David Dinwoodie: Journal of Anthropological Research.

"Existing works do not give such a strong sense of a man's life, the historical context, and the relationship with anthropologists and anthropological methods. Anyone interested in indigenous biography of Indian peoples of Oregon and the Northwest Coast will read this book"
Anonomous reviewer: University of Oklahoma Press.

"I was delighted with this book; it gives a very strong sense of Thompson as a boy, as a man and, finally, as a very aged man. His life is deftly tied to the events of the larger world, in the United States and beyond.. . . The book gets better as it goes along."
Ibid.

"This is compelling, well-rounded biography of a key coastal Oregon elder, until now known mostly to the academic community, or a small part of it."
2nd anonomous reviewer: University of Oklahom Press.

"Youst and Seaburg have done those interested in Western Oregon Indians a great service with this book. Not only have they written an entertaining and informative book about one main character who lived through so much of interest, they have also pointed the way for much more research and investigation.. . . There is no other book that will tell as much about what it was like to live on the Siletz Indian Reservation."
Ralph Mohr: reviewer,The World (Coos Bay, Oregon).

"Y & S's extraordinarily well researched biography of Thompson weaves together family traditions, ethnohistorical records, and ethnographic field notes to construct a vivid portrait of a man and his times."
Victor Golla: The Society of the Study of Indigenous Languages of the Americas.

"But in unearthing the work of these half-dozen different anthropologists and augmenting it with research of their own, Youst and Seaburg were able to fill in many gaps. The end result is an interesting and, at times, very poignant biography."
Barbara Michael: the Bookmonger, syndicated reviewer.

"Thompson's contributions, however, extended far beyond the discipline of anthropology. Through his work, he preserved the traditions of his people from which later generations of Coquilles drew the elements for a cultural revival in the 1970's and 1980's. This achievement was Coquelle Thompson's greatest legacy."
Mark van de Logt: Montana, The Magazine of Western History.

"Coquelle Thompson is an excellent choice for a 'cultural biography' . . . the book is highly accessible and succeeds where most scholarly work too often fails: it communicates an important story to a popular audience."
Gray H. Whaley: Western Historical Quarterly.

"a commendable job of reconstructing the substance and texture of Thompson's life while providing an intimate view of Indian lives in western Oregon. [It]provides wonderful insight into the dynamics of cultural persistence and change, because it shows how individuals such as Thompson recreated and transformed old traditions in a new setting."
David Arnold: Pacific Northwest Quarterly.